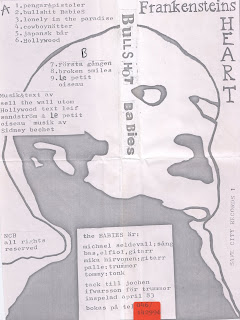 Don't know much about Bullshot Babies. At some point they were located in Lund, Sweden, and were led by singer-guitarist Michael Seldevall. Apart from this cassette they also released a self-released mini-LP. After Bullshot Babies Seldevall moved to Stockholm and played in Hedda Gambler. This is raw, dark punk.