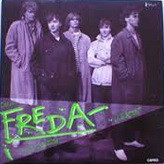 Freda were a christian rock band from Gnosjö in Sweden. They started out in the early eighties with a sound similar to U2 and gathered a following and got good reviews in the music press. At the end of the decade they were one of the biggest rock bands in Sweden and still lingers on in the collective conciousness, mostly due to lead singer Uno's solo career. This is their debut single, and this along with their two first LPs is the only thing worth seeking out by them.