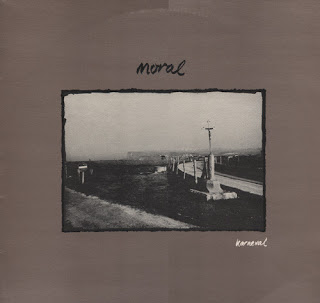 Moral had their roots in Karlskrona, Sweden, but later moved to Stockholm where they played most underground venues. Soon it was time for their debut release: Karneval. Released on Lennart Ökvists Parabellum Records. Parabellum were one of the best labels in Sweden at this time and released loads of great, darker music. This masterpiece have all the attributes of a great and dark post punk band. There's howling, anguished vocals and black lyrics to match. There's great rhythm work from the drums and bass annd shrapnel guitars. This is one of my absolute favorite Swedish records and I would be glad if it could get the recognition it so badly deserves. Do not miss this one!