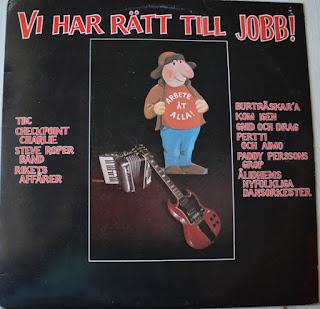 Here's another piece of the Pinheads-puzzle. Some of the members of Pinheads also played in TBC, which were kind of the first punk band in Umeå. This record deals with some kind of organization to promote workers rights and features the most important band from the small nordic town at the time. TBC later became Pinheads. Checkpoint Charlie and Rikets Affärer both made one single each at approximately the same time as this record. Steve Roper Band made three records, two of which are very hard to find. Every band plays nice power pop through punk or pub rock with lots of political discontent. The B-side of this record is mostly boring old Swedish folk music, so I haven't ripped it.